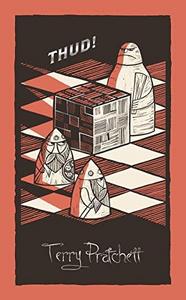 Thud! is a fantasy novel by British writer Terry Pratchett, the 34th book in the Discworld series, first released in the United States on 13 September 2005, then the United Kingdom on 1 October 2005. It was released in the U.S. three weeks before Pratchett's native UK in order to coincide with a signing tour. It was nominated for the Locus Award for Best Fantasy Novel in 2006.
Read more or edit on Wikipedia