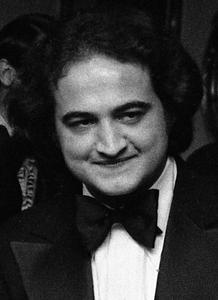 John Adam Belushi (January 24, 1949 — March 5, 1982) was an American comedian, actor and musician, and one of the seven original cast members of the NBC sketch comedy show Saturday Night Live (SNL). Throughout his career, Belushi had a personal and artistic partnership with his fellow SNL star Dan Aykroyd, whom he met while they were both working at Chicago's The Second City comedy club.Born in Chicago to Albanian American parents, Belushi started his own comedy troupe with Tino Insana and Steve Beshekas, called "The West Compass Trio". After being discovered by Bernard Sahlins, he performed with The Second City and met Aykroyd, Brian Doyle-Murray and Harold Ramis. In 1975, Belushi was recommended to SNL creator and showrunner Lorne Michaels by Chevy Chase and Michael O'Donoghue, who accepted Belushi as a new cast member of the show after an audition. He developed a series of characters on the show that reached high success, including his performances as Henry Kissinger and Ludwig van Beethoven. Belushi's Albanian ancestry lent itself to his "Olympia Restaurant" sketch (in which he sold nothing but "cheeseburgers, cheeps [potato chips] and Pepsi"). After his breakout film role as John Blutarsky in National Lampoon's Animal House (1978), Belushi later appeared in films such as 1941, The Blues Brothers, and Neighbors. He also pursued interests in music, creating with Aykroyd, Lou Marini, Tom Malone, Steve Cropper, Donald "Duck" Dunn, Paul Shaffer, and The Blues Brothers, from which the film received its name. In his personal life, Belushi struggled with heavy drug use that threatened his comedy career; he was dismissed and rehired at SNL on several occasions due to his behavior. In 1982, Belushi died from combined drug intoxication possibly caused by Cathy Smith, who injected him with a mixture of heroin and cocaine known as a speedball at the Chateau Marmont hotel in West Hollywood, California. He was posthumously honored with a star on the Hollywood Walk of Fame in 2004.
Read more or edit on Wikipedia