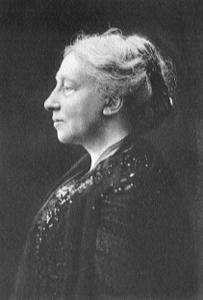 Isabella Augusta, Lady Gregory (née Persse; 15 March 1852 – 22 May 1932) was an Irish dramatist, folklorist and theatre manager. With William Butler Yeats and Edward Martyn, she co-founded the Irish Literary Theatre and the Abbey Theatre, and wrote numerous short works for both companies. Lady Gregory produced a number of books of retellings of stories taken from Irish mythology. Born into a class that identified closely with British rule, she turned against it. Her conversion to cultural nationalism, as evidenced by her writings, was emblematic of many of the political struggles to occur in Ireland during her lifetime. Lady Gregory is mainly remembered for her work behind the Irish Literary Revival. Her home at Coole Park in County Galway served as an important meeting place for leading Revival figures, and her early work as a member of the board of the Abbey was at least as important as her creative writings for that theatre's development. Lady Gregory's motto was taken from Aristotle: "To think like a wise man, but to express oneself like the common people."
Read more or edit on Wikipedia

The Rising of the Moon