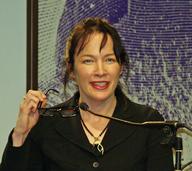 Alice Sebold (born September 6, 1963) is an American author. She is known for her novels The Lovely Bones and The Almost Moon, and a memoir, Lucky. The Lovely Bones was on The New York Times Best Seller list and was adapted into a film by the same name in 2010. Her memoir, Lucky, sold over a million copies and describes her experience in her first year at Syracuse University, when she was raped. Anthony Broadwater, who was incorrectly identified as the perpetrator by Sebold (and via a faulty method of hair analysis), ultimately served 16 years in prison. He was exonerated in 2021, after a judge found serious issues with the original conviction. Source: Wikipedia (en)