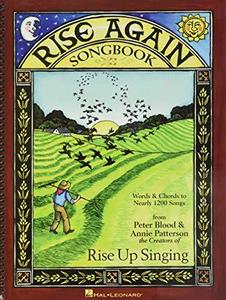 Rise Again: A Group Singing Songbook is a sequel to the popular folk music fake book Rise Up Singing, containing chords, lyrics, and sources. There are 1200 completely new songs in the 2015 edition. Compiled by Annie Patterson and Peter Blood. Released in 2016 by Hal Leonard Books. Songs in Rise Again are grouped by chapters just as in Rise Up Singing. Chapters are arranged alphabetically, as are songs within chapters. Some chapters have the same titles as in Rise Up Singing, but some chapter titles are different. The main change is that the new songbook has a number of new song genre chapters reflecting the inclusion of more songs from genres other than folk music. There are now whole chapters devoted to blues, country music, jazz, early rock & roll, British rock, Motown, and other US rock (including a chapter focusing on "millennial" popular songs written since 1995). Pete Seeger, who wrote the introduction to Rise Up Singing, wrote a moving preface to Rise Again a year before he died. Billy Bragg wrote the foreword to Rise Again.
Read more or edit on Wikipedia