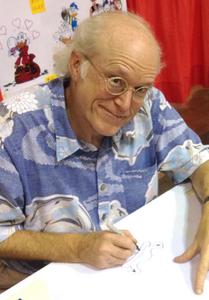 Keno Don Hugo Rosa , known simply as Don Rosa (born June 29, 1951), is an American comic book writer and illustrator known for his Disney comics stories about Scrooge McDuck, Donald Duck, and other characters which Carl Barks created for Disney-licensed comic books, first published in America by Dell Comics. Many of his stories are built on characters and locations created by Carl Barks; among these was his first Duck story, "The Son of the Sun" (1987), which was nominated for a Harvey Award in the "Best Story of the Year" category. Rosa created about 90 stories between 1987 and 2006. In 1995, his 12-chapter work The Life and Times of Scrooge McDuck won the Eisner Award for "Best Serialized Story".
Read more or edit on Wikipedia