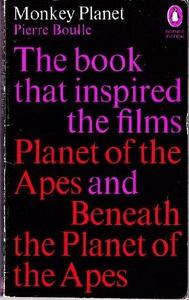 Planet of the Apes

La Planète des singes, known in English as Planet of the Apes in the US and Monkey Planet in the UK, is a 1963 science fiction novel by French author Pierre Boulle. It was adapted into the 1968 film Planet of the Apes, launching the Planet of the Apes media franchise.The novel tells the tale of three human explorers from Earth who visit a planet orbiting the star Betelgeuse, in which great apes are the dominant intelligent and civilized species, whereas humans are reduced to a savage animal-like state.
Read more or edit on Wikipedia