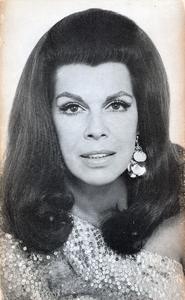 Jacqueline Susann (August 20, 1918 – September 21, 1974) was an American novelist and actress. Her iconic novel, Valley of the Dolls (1966), is one of the best-selling books in publishing history. With her two subsequent works, The Love Machine (1969) and Once Is Not Enough (1973), Susann became the first author to have three novels top The New York Times Best Seller List consecutively.
Read more or edit on Wikipedia