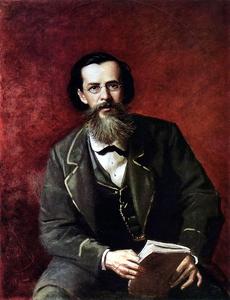 Apollon Nikolayevich Maykov (Russian: Аполло́н Никола́евич Ма́йков, June 4 [O.S. May 23] 1821, Moscow – March 20 [O.S. March 8] 1897, Saint Petersburg) was a Russian poet, best known for his lyric verse showcasing images of Russian villages, nature, and history. His love for ancient Greece and Rome, which he studied for much of his life, is also reflected in his works. Maykov spent four years translating the epic The Tale of Igor's Campaign (1870) into modern Russian. He translated the folklore of Belarus, Greece, Serbia and Spain, as well as works by Heine, Adam Mickiewicz and Goethe, among others. Several of Maykov's poems were set to music by Russian composers, among them Rimsky-Korsakov and Tchaikovsky. Maykov was born into an artistic family and educated at home, by the writer Ivan Goncharov, among others. At the age of 15, he began writing his first poetry. After finishing his gymnasium course in just three years, he enrolled in Saint Petersburg University in 1837. He began publishing his poems in 1840, and came out with his first collection in 1842. The collection was reviewed favorably by the influential critic Vissarion Belinsky. After this, he traveled throughout Europe, returning to Saint Petersburg in 1844, where he continued to publish poetry and branched out into literary criticism and essay writing. He continued writing throughout his life, wavering several times between the conservative and liberal camps, but maintaining a steady output of quality poetical works. In his liberal days he was close to Belinsky, Nikolay Nekrasov, and Ivan Turgenev, while in his conservative periods he was close to Fyodor Dostoyevsky. He ended his life as a conservative. Maykov died in Saint Petersburg On March 8, 1897.
Read more or edit on Wikipedia