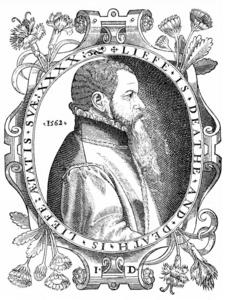 John Day (or Daye) (c. 1522 – 23 July 1584) was an English Protestant printer. He specialised in printing and distributing Protestant literature and pamphlets, and produced many small-format religious books, such as ABCs, sermons, and translations of psalms. He found fame, however, as the publisher of John Foxe's Actes and Monuments, also known as the Book of Martyrs, the largest and most technologically accomplished book printed in sixteenth-century England.Day rose to the top of his profession during the reign of Edward VI (1547–1553). At this time, restrictions on publishers were relaxed, and a wave of propaganda on behalf of the English Reformation was encouraged by the government of the Lord Protector, Edward Seymour, 1st Duke of Somerset. During the reign of the Catholic Queen Mary I, many Protestant printers fled to the continent, but Day stayed in England and continued to print Protestant literature. In 1554, he was arrested and imprisoned, presumably for these illicit printing activities. Under Queen Elizabeth I, Day returned to his premises at Aldersgate in London, where he enjoyed the patronage of high-ranking officials and nobles, including William Cecil, Robert Dudley, and Matthew Parker. With their support, he published the Book of Martyrs and was awarded monopolies for some of the most popular English books, such as The ABC with Little Catechism and The Whole Booke of Psalmes. Day, whose technical skill matched his business acumen, has been called "the master printer of the English Reformation".
Read more or edit on Wikipedia