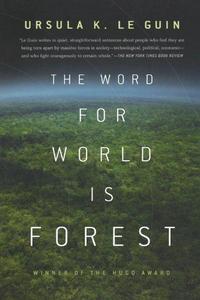 The Word for World Is Forest

The Word for World Is Forest is a science fiction novella by American writer Ursula K. Le Guin, first published in the United States in 1972 as a part of the anthology Again, Dangerous Visions, and published as a separate book in 1976 by Berkley Books. It is part of Le Guin's Hainish Cycle. The story focuses on a military logging colony set up on the fictional planet of Athshe by people from Earth (referred to as "Terra"). The colonists have enslaved the completely non-aggressive native Athsheans, and treat them very harshly. Eventually, one of the natives, whose wife was raped and killed by a Terran military captain, leads a revolt against the Terrans, and succeeds in getting them to leave the planet. However, in the process their own peaceful culture is introduced to mass violence for the first time. The novel carries strongly anti-colonial and anti-militaristic overtones, driven partly by Le Guin's negative reaction to the Vietnam War. It also explores themes of sensitivity to the environment, and of connections between language and culture. It shares the theme of dreaming with Le Guin's novel The Lathe of Heaven, and the metaphor of the forest as a consciousness with the story "Vaster than Empires and More Slow". The novella won the Hugo Award in 1973, and was nominated for several other awards. It received generally positive reviews from reviewers and scholars, and was variously described as moving and hard-hitting. Several critics, however, stated that it compared unfavorably with Le Guin's other works such as The Left Hand of Darkness, due to its sometimes polemic tone and lack of complex characters.
Read more or edit on Wikipedia