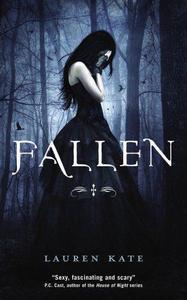 Fallen is the first novel in the Fallen series written by Lauren Kate. It is a young adult, fantasy, paranormal romance published in 2009 under Delacorte Press. The novel revolves around a young girl named Lucinda Price who is sent to Sword & Cross Reform School in Savannah, Georgia, after she is accused of murdering a boy by starting a fire. At the reform school, she meets Daniel, a handsome boy whom she feels inexplicably drawn to, and believes that she has already met before. The book revolves mostly around the concept of religion, fallen angels and reincarnation. Critics commented on how Kate's novel has conceptual similarities in Stephenie Meyer's Twilight, replacing the mythical characters as fallen angels instead of vampires.Fallen is the first in a series of six books, which have sold nearly 10 million copies worldwide in more than 30 countries. The novel has been translated in more than 30 languages and has more than 80 cover editions. On December 27, 2009, Fallen reached number 3 on The New York Times Best Seller list. It was also a USA Today Bestseller, an Indie Bestseller, and a Publishers Weekly Flying Start. It has been made into a feature-length film of the same name under Lotus Entertainment which was released in November 2016.
Read more or edit on Wikipedia