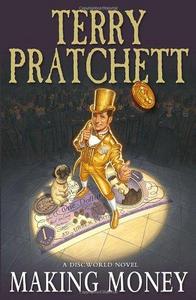 Making Money is a fantasy novel by British writer Terry Pratchett, part of his Discworld series, first published in the UK on 20 September 2007. It is the second novel featuring Moist von Lipwig, and involves the Ankh-Morpork mint and specifically the introduction of paper money to the city. The novel won the Locus Award for Best Fantasy Novel in 2008, and was nominated for the Nebula Award the same year.
Read more or edit on Wikipedia