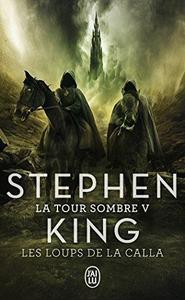 The Dark Tower V: Wolves of the Calla

Wolves of the Calla is a fantasy novel by American writer Stephen King. It is the fifth book in his The Dark Tower series. The book continues the story of Roland Deschain, Eddie Dean, Susannah Dean, Jake Chambers, and Oy as they make their way toward the Dark Tower. The subtitle of this novel is Resistance. Prior to the novel's publication, two excerpts were published: "Calla Bryn Sturgis" was published in 2001 on Stephen King's official site, and "The Tale of Gray Dick" was published in 2003 in McSweeney's Mammoth Treasury of Thrilling Tales. Both excerpts were incorporated in revised form into the novel. Wolves of the Calla was nominated for the Locus Award for Best Fantasy Novel in 2004.
Read more or edit on Wikipedia