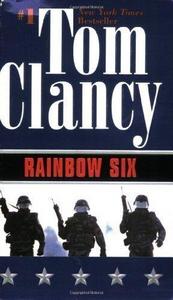 Rainbow Six is a techno-thriller novel, written by Tom Clancy and released on August 3, 1998. It is the second book to primarily focus on John Clark, one of the recurring characters in the Jack Ryan universe, after Without Remorse (1993). Rainbow Six also features his son-in-law Domingo "Ding" Chavez, and explores the adventures of a multinational counter-terrorism unit that they formed, codenamed as Rainbow. The title refers to Clark's title as commander of Rainbow. The book debuted at number one on the New York Times bestseller list, and has since been adapted into a series of video games.
Read more or edit on Wikipedia