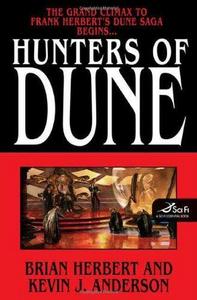 Hunters of Dune is the first of two books written by Brian Herbert and Kevin J. Anderson to conclude Frank Herbert's original Dune series of science fiction novels. The cliffhanger ending of Frank Herbert's Chapterhouse: Dune (1985) and his subsequent death in 1986 left some overarching plotlines unresolved. Released on August 22, 2006, Hunters continues the story of the danger posed to humanity by a remote, unnamed, but ever-present "great enemy". The novel is based on notes left behind by Frank Herbert, but Hunters and its 2007 sequel Sandworms of Dune represent the author's version of what Frank Herbert referred to as Dune 7, his own planned seventh novel in the Dune series. The first five chapters of the novel were available prior to the novel's publication via free download from the official Dune website, released monthly from March until July in 2006.
Read more or edit on Wikipedia