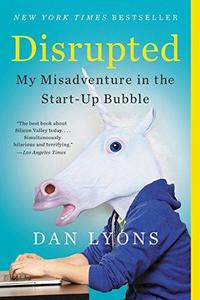 Disrupted: My Misadventure in the Start Up Bubble

Disrupted: My Misadventure in the Start-Up Bubble is a book written by American author and journalist Daniel Lyons. The book describes the author's experiences working at the software company HubSpot and offers a sharp critique of the company's management and culture.Shortly after the book was published, Lyons wrote in The New York Times that HubSpot had a "frat house" atmosphere. He also called the company a "digital sweatshop" in which workers had little job security. Later that month, HubSpot's founders gave an official response to the book, in which they addressed several, but not all, of Lyons' claims.Disrupted was first published on April 5, 2016, by the Hachette Book Group.
Read more or edit on Wikipedia