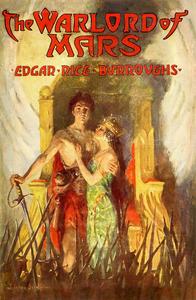 The Warlord of Mars

The Warlord of Mars is a science fantasy novel by American writer Edgar Rice Burroughs, the third of his Barsoom series. Burroughs began writing it in June, 1913, going through five working titles; Yellow Men of Barsoom, The Fighting Prince of Mars, Across Savage Mars, The Prince of Helium, and The War Lord of Mars. The finished story was first published in All-Story Magazine as a four-part serial in the issues for December, 1913-March, 1914. It was later published as a complete novel by A. C. McClurg in September, 1919.
Read more or edit on Wikipedia