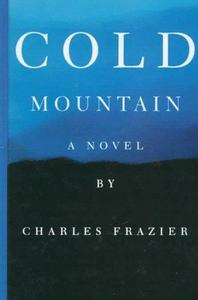 Cold Mountain is a 1997 historical novel by Charles Frazier which won the U.S. National Book Award for Fiction. It tells the story of W. P. Inman, a wounded deserter from the Confederate army near the end of the American Civil War who walks for months to return to Ada Monroe, the love of his life; the story shares several similarities with Homer's Odyssey. The narrative alternates back and forth every chapter between the stories of Inman and Ada, a minister's daughter recently relocated from Charleston to a farm in a rural mountain community near Cold Mountain, North Carolina from which Inman hails. Though they only knew each other for a brief time before Inman departed for the war, it is largely the hope of seeing Ada again that drives Inman to desert the army and make the dangerous journey back to Cold Mountain. Details of their brief history together are told at intervals in flashback over the course of the novel. The novel, Frazier's first, became a major best-seller, selling roughly three million copies worldwide. It was adapted into an Academy Award-winning film of the same name in 2003. Frazier has said that the real W. P. Inman was his great-grand-uncle who lived near the real Cold Mountain, which is now within the Pisgah National Forest, Haywood County, North Carolina. In the book's acknowledgments, Frazier apologizes for taking "great liberties" in writing of W. P. Inman's life. Frazier also used Hendricks County, Indiana, native John V. Hadley's book Seven Months a Prisoner as inspiration for the novel.
Read more or edit on Wikipedia