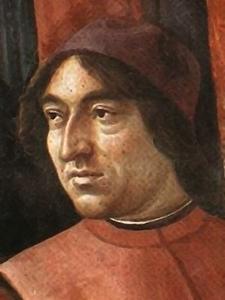 Agnolo (Angelo) Ambrogini (14 July 1454 – 24 September 1494), commonly known by his nickname Poliziano (Italian: [politˈtsjaːno]; anglicized as Politian; Latin: Politianus), was an Italian classical scholar and poet of the Florentine Renaissance. His scholarship was instrumental in the divergence of Renaissance (or Humanist) Latin from medieval norms and for developments in philology. His nickname, Poliziano, by which he is chiefly identified to the present day, was derived from the Latin name of his birthplace, Montepulciano (Mons Politianus). Poliziano's works include translations of passages from Homer's Iliad, an edition of the poetry of Catullus and commentaries on classical authors and literature. It was his classical scholarship that brought him the attention of the wealthy and powerful Medici family that ruled Florence. He served the Medici as a tutor to their children, and later as a close friend and political confidant. His later poetry, including La Giostra, glorified his patrons. He used his didactic poem Manto, written in the 1480s, as an introduction to his lectures on Virgil.
Read more or edit on Wikipedia