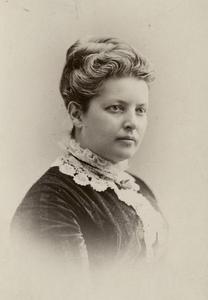 Mary Elizabeth Mapes Dodge (January 26, 1831 – August 21, 1905) was an American children's author and editor, best known for her novel Hans Brinker. She was the recognized leader in juvenile literature for almost a third of the nineteenth century.Dodge was associated with St. Nicholas Magazine for more than thirty years, and it became one of the most successful magazines for children during the second half of the nineteenth century, with a circulation of almost 70,000 copies. She had the faculty of suggesting, creating, obtaining the contributions she wanted from just the people she wanted to write. She was able to persuade many of the great writers of the world to contribute to her children's magazine – Mark Twain, Louisa May Alcott, Robert Louis Stevenson, Alfred, Lord Tennyson, Henry Wadsworth Longfellow, William Cullen Bryant, Oliver Wendell Holmes Sr., Bret Harte, John Hay, Charles Dudley Warner, Elizabeth Stuart Phelps Ward, and scores of others. One day, Rudyard Kipling told her a story of the Indian jungle; Dodge asked him to write it down for St. Nicholas. He never had written for children, but he would try. The result was The Jungle Book.After the death of her husband, Dodge turned to literature as a means to earn the money to educate her sons. She began to write short sketches for children, and soon brought out a volume of them, entitled Irvington Stories, (New York, 1864), which was very successful. She next published Hans Brinker, or The Silver Skates (New York, 1865); translated into Dutch, French, German, Russian and Italian, and was awarded a prize of 1,500 francs by the French Academy. With Donald Grant Mitchell and Harriet Beecher Stowe, Dodge was one of the earliest editors of Hearth and Home, and for several years, she conducted the household and children's department of that journal. In 1873, when St. Nicholas Magazine was started, she became its editor. Her other published volumes were A Few Friends, and How They Amused Themselves (Philadelphia, i860), Rhymes and Jingles (New York, 1874), Theophilus and Others (New York, 1876) Along the Way, poems (New York, 1879), and Donald and Dorothy (New York, 1883). She was the author of "Miss Maloney on the Chinese Question," published in Scribner's Monthly in 1870. Dodge contributed to Harper's Magazine, Atlantic Monthly, the Centur, and other periodicals.
Read more or edit on Wikipedia