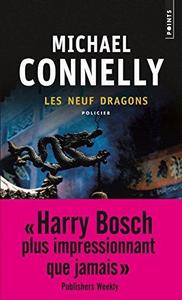 Nine Dragons is the 14th novel in the Harry Bosch series and the 22nd book (21st novel) by American crime author Michael Connelly. It was published in the U.K. and Ireland on October 1, 2009, and worldwide on October 13, 2009. The novel is partly set in Hong Kong, where Bosch's daughter Maddie and ex-wife Eleanor Wish live. The main plot involves Maddie being kidnapped by a Chinese Triad (crime syndicate), which Bosch believes is due to his investigation of an L.A. murder, in which his primary suspect is a member of a triad that was shaking down the victim. As a result, Bosch heads to Hong Kong in an effort to rescue her. The name of the most populated region of Hong Kong, Kowloon, means "nine dragons" in English.
Read more or edit on Wikipedia