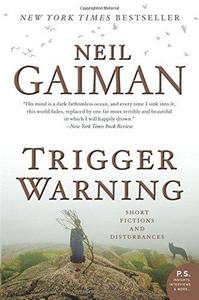 Trigger Warning is a collection of short fiction and verse by Neil Gaiman. It was first published in the United States in 2015 by William Morrow. The title is a reference to the concept of trigger warnings, originally intended to warn survivors of sexual abuse or other trauma about potentially graphic content, and its recent prominence in contemporary discourse. In his introduction to the book, Neil Gaiman considers the question of whether stories should be considered "safe spaces," and, concluding that they should not, warns readers that the stories in this collection may disturb them.Most of the stories in the book are reprints from other sources, such as magazines and anthologies, however "Black Dog," a new short story sequel to American Gods featuring its main character, Shadow, was purpose-written for this collection.
Read more or edit on Wikipedia