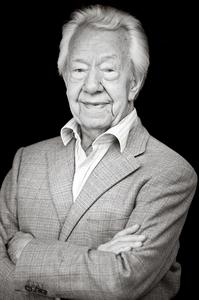 Marcel Honoree Nestor, Knight Neels (30 December 1922 – 6 November 2016), known as Marc Sleen, was a Belgian cartoonist. He was mostly known for his comic The Adventures of Nero and Co., but also created gag comics like Piet Fluwijn en Bolleke, De Lustige Kapoentjes, Doris Dobbel, Oktaaf Keunink and De Ronde van Frankrijk. Sleen was one of the most celebrated comics artists in his home country. His work is admired for its absurd and sometimes satirical comedy, as well for the fact that he worked completely singlehandedly without any assistance for 45 years on end, a feat that landed him a spot in The Guinness Book of Records in 1992. (This feat has been surpassed since by Jim Russell's The Potts, which ran for 62 years.) He was one of the few comics artists in Belgium who had a museum dedicated to his work.
Read more or edit on Wikipedia

The Adventures of Nero