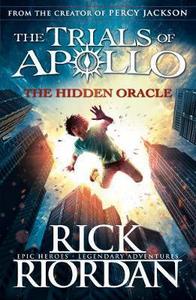 The Hidden Oracle is a fantasy novel based on Greek and Roman mythology written by American author Rick Riordan. It was published on May 3, 2016, and is the first book in The Trials of Apollo series, the second spin-off of the Percy Jackson & the Olympians series. The book and its cover art by John Rocco were first announced in 2015. It has been published in hardcover, audiobook, ebook, and large-print editions. To date, The Hidden Oracle has been translated into 19 languages from its original English. The book follows the god Apollo, who is turned into a human teenager and thrown down from Olympus to New York City as a punishment by his father Zeus. Joined by the demigod Meg McCaffrey, Apollo goes to Camp Half-Blood, where he discovers that he will have to regain control of the five oracles of Ancient Greece in order to receive pardon from Zeus. The novel received positive reviews from critics, who praised Apollo's narration and the book's humor. During its first week of release, The Hidden Oracle sold about 62,000 copies, reaching the top of The New York Times and Publishers Weekly bestseller lists. It won the 2016 Goodreads Choice Award for Middle Grade and Children's Fiction.
Read more or edit on Wikipedia