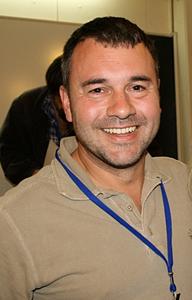 Richard Kingsley Morgan, (born 24 September 1965) is a British science fiction and fantasy author of books, short stories, and graphic novels. He is the winner of the Philip K. Dick Award for his 2003 book Altered Carbon, which was adapted into a Netflix series released in 2018. His third book, Market Forces, won the John W. Campbell Award in 2005, while his 2008 work Thirteen garnered him the Arthur C. Clarke Award.
Read more or edit on Wikipedia