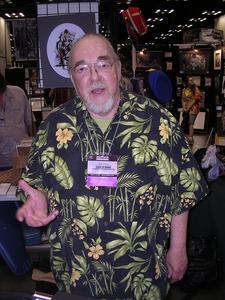 Ernest Gary Gygax ( GY-gaks; July 27, 1938 – March 4, 2008) was an American game designer and author best known for co-creating the pioneering role-playing game Dungeons & Dragons (D&D) with Dave Arneson. In the 1960s, Gygax created an organization of wargaming clubs and founded the Gen Con gaming convention. In 1971, he helped develop Chainmail, a miniatures wargame based on medieval warfare. He co-founded the company Tactical Studies Rules (TSR, Inc.) with childhood friend Don Kaye in 1973. The following year, he and Arneson created D&D, which expanded on Gygax's Chainmail and included elements of the fantasy stories he loved as a child. In the same year, he founded The Dragon, a magazine based around the new game. In 1977, Gygax began work on a more comprehensive version of the game, called Advanced Dungeons & Dragons. Gygax designed numerous manuals for the game system, as well as several pre-packaged adventures called "modules" that gave a person running a D&D game (the "Dungeon Master") a rough script and ideas on how to run a particular gaming scenario. In 1983, he worked to license the D&D product line into the successful D&D cartoon series. After leaving TSR in 1986 over issues with its new majority owner, Gygax continued to create role-playing game titles independently, beginning with the multi-genre Dangerous Journeys in 1992. He designed another gaming system called Lejendary Adventure, released in 1999. In 2005, Gygax was involved in the Castles & Crusades role-playing game, which was conceived as a hybrid between the third edition of D&D and the original version of the game conceived by Gygax. Gygax was married twice and had six children. In 2004, Gygax suffered two strokes and narrowly avoided a subsequent heart attack; he was then diagnosed with an abdominal aortic aneurysm and died in March 2008.
Read more or edit on Wikipedia