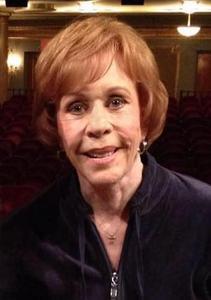 Carol Creighton Burnett (born April 26, 1933) is an American actress, comedienne, singer, and writer, whose career spans seven decades of television. She is best known for her groundbreaking comedy variety show The Carol Burnett Show, which originally aired on CBS. It was one of the first of its kind to be hosted by a woman. She has achieved success on stage, television and film in varying genres including dramatic and comedic roles. She has also appeared on various talk shows and as a panelist on game shows. Born in San Antonio, Texas, Burnett moved with her grandmother to Hollywood, where she attended Hollywood High School and eventually studied theater and musical comedy at UCLA. Later she performed in nightclubs in New York City and had a breakout success on Broadway in 1959 in Once Upon a Mattress, for which she received a Tony Award nomination. She soon made her television debut, regularly appearing on The Garry Moore Show for the next three years, and won her first Emmy Award in 1962. Burnett had her television special debut in 1963 when she starred as Calamity Jane in the Dallas State Fair Musicals production of Calamity Jane on CBS. Burnett moved to Los Angeles, and began an 11-year run as star of The Carol Burnett Show on CBS television from 1967 to 1978. With its vaudeville roots, The Carol Burnett Show was a variety show that combined comedy sketches with song and dance. The comedy sketches included film parodies and character pieces. Burnett created many memorable characters during the show's run, and both she and the show won numerous Emmy and Golden Globe Awards. During and after her variety show, Burnett appeared in many television and film projects. Her film roles include Pete 'n' Tillie (1972), The Front Page (1974), The Four Seasons (1981), Annie (1982), Noises Off (1992), and Horton Hears a Who! (2008). On television, she has appeared in other sketch shows; in dramatic roles in 6 Rms Riv Vu (1974) and Friendly Fire (1979); in various well-regarded guest roles, such as in Mad About You, for which she won an Emmy Award; and in specials with Julie Andrews, Dolly Parton, Beverly Sills, and others. She returned to the Broadway stage in 1995 in Moon Over Buffalo, for which she was again nominated for a Tony Award. Burnett has written and narrated several memoirs, earning Grammy nominations for almost all of them, and a win for In Such Good Company: Eleven Years of Laughter, Mayhem, and Fun in the Sandbox.In 2005, Burnett was recognized as "one of America's most cherished entertainers" and was awarded the Presidential Medal of Freedom "for enhancing the lives of millions of Americans and for her extraordinary contributions to American entertainment", by President George W. Bush. In 2013, Burnett was awarded the Mark Twain Prize for American Humor at the John F. Kennedy Center for the Performing Arts. In 2019, the Golden Globes named an award after her for career achievement in television, the Carol Burnett Award, and Burnett received its first award.
Read more or edit on Wikipedia 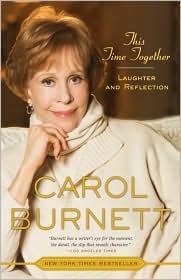