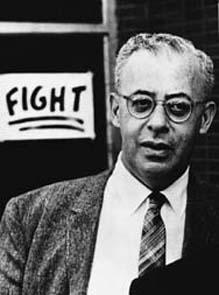 Saul David Alinsky (January 30, 1909 – June 12, 1972) was an American community activist and political theorist. His work through the Chicago-based Industrial Areas Foundation helping poor communities organize to press demands upon landlords, politicians and business leaders won him national recognition and notoriety. Responding to the impatience of a New Left generation of activists in the 1960s, in his widely cited Rules for Radicals: A Pragmatic Primer (1971) Alinsky defended the arts both of confrontation and of compromise involved in community organizing as keys to the struggle for social justice.
Read more or edit on Wikipedia