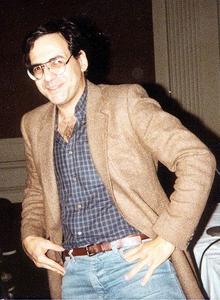 Stephen Ross Gerber (; September 20, 1947 – February 10, 2008) was an American comic book writer best known for co-creating the satiric Marvel Comics character Howard the Duck and a character-defining run on Man-Thing, one of their monster properties. Other notable works include Omega the Unknown, Marvel Spotlight: "Son of Satan", The Defenders, Marvel Presents: "Guardians of the Galaxy", Daredevil and Foolkiller. Gerber was known for including lengthy text pages in the midst of comic book stories, such as in his graphic novel, Stewart the Rat. Gerber was posthumously inducted into the Will Eisner Comic Book Hall of Fame in 2010.
Read more or edit on Wikipedia