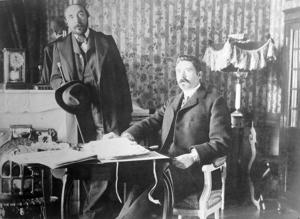 J.-H. Rosny was the pseudonym of the brothers Joseph Henri Honoré Boex (1856–1940) and Séraphin Justin François Boex (1859–1948), both born in Brussels. Together they wrote a series of novels and short stories about natural, prehistoric and fantasy subjects, published between 1886 and 1909, as well as several popular science works. After 1909, the two brothers ended their collaboration, and Joseph Boex took to signing his works as J.-H. Rosny aîné (J. H. Rosny Major), while his brother Seraphin used the name J.-H. Rosny jeune (J. H. Rosny Minor). In 1887, the brothers were among the writers who entered a formal protest in Le Figaro newspaper against Émile Zola's La Terre. In 1903, the brothers were named to the first jury for the Prix Goncourt, an influential annual French literary award. They are considered to be among the founders of modern science fiction. Of the two, the elder brother Joseph (J.-H. Rosny aîné) is somewhat better known and many of the joint Rosny works are incorrectly attributed only to the elder brother. Of their books, The Quest for Fire is the best known, especially since it was made into a motion picture of the same name in 1981.
Read more or edit on Wikipedia