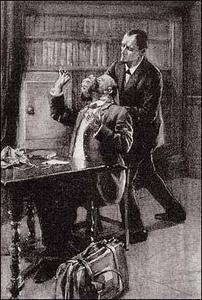 "His Last Bow. The War Service of Sherlock Holmes", later titled "His Last Bow: An Epilogue of Sherlock Holmes", is one of 56 short stories about Sherlock Holmes written by Sir Arthur Conan Doyle. It was first published in September 1917 in Strand Magazine and collected as the last of an anthology of eight stories titled His Last Bow: Some Reminiscences of Sherlock Holmes the following month. The narration is in the third person, instead of the first person narration usually provided by the character of Dr. Watson, and it is a spy story, rather than a detective mystery. Due to its portrayal of British and German spies on the eve of war, its publication during the First World War and its patriotic themes, the story has been interpreted as a propaganda tool intended to boost morale for British readers.
Read more or edit on Wikipedia