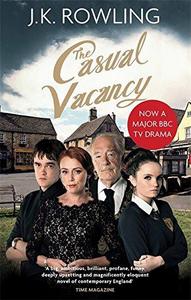 The Casual Vacancy is a 2012 novel written by J. K. Rowling. The book was published worldwide by the Little, Brown Book Group on 27 September 2012. A paperback edition was released on 23 July 2013. It was Rowling's first publication since the Harry Potter series, her first apart from that series, and her first novel for adult readership.The novel is set in a suburban West Country town called Pagford and begins with the death of beloved Parish Councillor Barry Fairbrother. Subsequently, a seat on the council is vacant and a conflict ensues before the election for his successor takes place. Factions develop, particularly concerning whether to dissociate with a local council estate, 'the Fields', with which Barry supported an alliance. However, those running for a place soon find their darkest secrets revealed on the Parish Council online forum, ruining their campaign and leaving the election in turmoil. Major themes in the novel are class, politics, and social issues such as drugs, prostitution and rape. The novel was the fastest-selling in the United Kingdom in three years and had the second best-selling opening week for an adult novel there since Dan Brown's The Lost Symbol. It became the 15th best-selling book of 2012 during its first week of release. Within the first three weeks the book's total sales topped one million copies in English in all formats across all territories, including the US and the UK. The book also set a Goodreads record for the all-time biggest 'started reading' day, later winning the Best Fiction category in the Goodreads Choice Awards 2012. The book was adapted into a television drama broadcast in 2015.
Read more or edit on Wikipedia