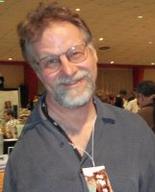 William Francis Messner-Loebs (; born William Francis Loebs, Jr., February 19, 1949) is an American comics artist and writer from Michigan, also known as Bill Loebs and Bill Messner-Loebs. His hyphenated surname is a combination of his and his wife Nadine's unmarried surnames. In the 1980s and 1990s he wrote runs of series published by DC Comics, Image Comics, Comico, and other comics publishers, including DC's superhero series Flash and Wonder Woman among others. Additionally he has both written and drawn original creator-owned works, such as Journey: The Adventures of Wolverine MacAlistaire. Source: Wikipedia (en)