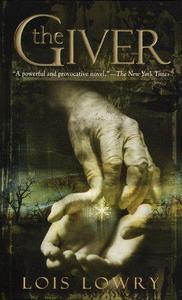 The Giver is a 1993 American young adult dystopian novel by Lois Lowry. It is set in a society which at first appears to be utopian but is revealed to be dystopian as the story progresses. The novel follows a 12-year-old boy named Jonas. The society has taken away pain and strife by converting to "Sameness", a plan that has also eradicated emotional depth from their lives. Jonas is selected to inherit the position of Receiver of Memory, the person who stores all the past memories of the time before Sameness, as there may be times where one must draw upon the wisdom gained from history to aid the community's decision making. Jonas struggles with concepts of all the new emotions and things introduced to him: whether they are inherently good, evil, or in between, and whether it is even possible to have one without the other. The Community lacks any color, memory, climate, or terrain, all in an effort to preserve structure, order, and a true sense of equality beyond personal individuality.The Giver won the 1994 Newbery Medal and has sold more than 10 million copies worldwide as of 2014. In Australia, Canada, and the United States, it is on many middle school reading lists, but it is also frequently challenged and it ranked number 11 on the American Library Association list of the most challenged books of the 1990s. A 2012 survey based in the U.S. designated it the fourth-best children's novel of all time.In 2014, a film adaptation was released, starring Jeff Bridges, Meryl Streep and Brenton Thwaites. The novel forms a loose quartet with three other books set in the same future era, known as The Giver Quartet: Gathering Blue (2000), Messenger (2004), and Son (2012).
Read more or edit on Wikipedia