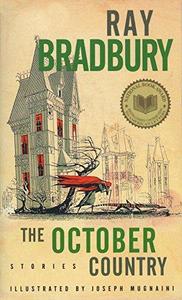 The October Country is a 1955 collection of nineteen macabre short stories by American writer Ray Bradbury. It reprints fifteen of the twenty-seven stories of his 1947 collection Dark Carnival, and adds four more of his stories previously published elsewhere. The collection was published in numerous editions by Ballantine Books. The 1955 hardcover and 1956 and 1962 softcover versions featured artwork by Joseph Mugnaini that was replaced in 1971 by an entirely different Bob Pepper illustration. It was again published in 1996, by Del Rey Books, a branch of Ballantine Books; the illustrations within were drawn by Mugnaini. In this edition there was a foreword written by Bradbury himself, called "May I Die Before My Voices" in Los Angeles, California, on April 24, 1996. The October Country was published in the United Kingdom by Rupert Hart-Davis Ltd. in 1956, and reissued in 1976 by Grafton, an imprint of HarperCollins Publishers. The 1976 UK paperback edition includes "The Traveler", originally from the aforementioned Dark Carnival, and omits "The Next In Line", "The Lake", "The Small Assassin", "The Crowd", "Jack-In-The-Box", "The Man Upstairs" and "The Cistern".In 1999, The October Country was published by Avon Books, Inc. with a new cover illustration by Joseph Mugnaini, and a new introduction by Bradbury called “Homesteading the October Country”.
Read more or edit on Wikipedia