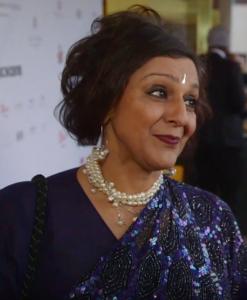 Meera Syal FRSL (born Feroza Syal; 27 June 1961) is a British comedian, writer, playwright, singer, journalist and actress. She rose to prominence as one of the team that created Goodness Gracious Me and portraying Sanjeev's grandmother, Ummi, in The Kumars at No. 42. She became one of the UK's best-known Asian personalities. She was appointed Member of the Order of the British Empire (MBE) in the 1997 New Year Honours and in 2003 was listed in The Observer as one of the 50 funniest acts in British comedy. She was appointed Commander of the Order of the British Empire (CBE) in the 2015 New Year Honours for services to drama and literature.
Read more or edit on Wikipedia