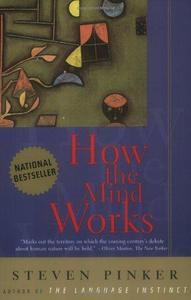 How the Mind Works

How the Mind Works is a 1997 book by the Canadian-American cognitive scientist Steven Pinker, in which the author attempts to explain some of the human mind's poorly understood functions and quirks in evolutionary terms. Drawing heavily on the paradigm of evolutionary psychology articulated by John Tooby and Leda Cosmides, Pinker covers subjects such as vision, emotion, feminism, and "the meaning of life". He argues for both a computational theory of mind and a neo-Darwinist / adaptationist approach to evolution, all of which he sees as the central components of evolutionary psychology. He criticizes difference feminism because he believes scientific research has shown that women and men differ little or not at all in their moral reasoning. The book was a Pulitzer Prize Finalist.
Read more or edit on Wikipedia