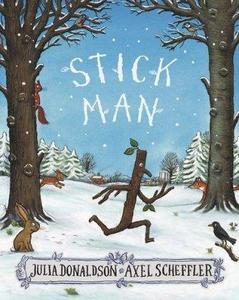 Stick Man written by former Children's Laureate, Julia Donaldson, and illustrated by Axel Scheffler is a children's story about an anthropomorphic wooden stick who becomes separated from his family home and his Odyssey-like adventure to return there. He is eventually reunited with his family in the "family tree" as a result of his interaction with Father Christmas. It takes place in England. Stick Man has sold over 2 million copies worldwide and has been adapted into a short animated film and a successful stage play.
Read more or edit on Wikipedia