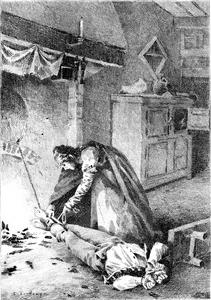 Les Chouans (French pronunciation: ​[le ʃwɑ̃], The Chouans) is an 1829 novel by French novelist and playwright Honoré de Balzac (1799–1850) and included in the Scènes de la vie militaire section of his novel sequence La Comédie humaine. Set in the French region of Brittany, the novel combines military history with a love story between the aristocratic Marie de Verneuil and the Chouan royalist Alphonse de Montauran. It takes place during the 1799 post-war uprising in Fougères. Balzac conceived the idea for the novel during a trip to Brittany arranged by a family friend in 1828. Intrigued by the people and atmosphere of the region, he began collecting notes and descriptions for later use. After publishing an Avertissement for the novel, he released three editions – each of them revised significantly. The first novel Balzac published without a pseudonym, he used many titles as he wrote and published, including Le Gars, Les Chouans ou la Bretagne il y a trente ans, and Le Dernier Chouan ou la Bretagne en 1800. Following closely in the footsteps of Sir Walter Scott, the novel uses its truthful historical backdrop to tell a fictional story of people who sculpted the past. The novel addresses themes of passionate love, vengeful trickery, and social status. While it is disdained by critics in favor of Balzac's later work, the novel marks a turning point in his life and artistry.
Read more or edit on Wikipedia