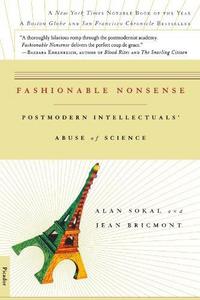 Fashionable Nonsense: Postmodern Intellectuals' Abuse of Science (1998; UK: Intellectual Impostures), first published in French in 1997 as Impostures intellectuelles, is a book by physicists Alan Sokal and Jean Bricmont. As part of the so-called science wars, Sokal and Bricmont criticize postmodernism in academia for the misuse of scientific and mathematical concepts in postmodern writing. The book was published in English in 1998, with revisions to the original 1997 French edition for greater relevance to debates in the English-speaking world. According to some reports, the response within the humanities was "polarized;" critics of Sokal and Bricmont charged that they lacked understanding of the writing they were scrutinizing. By contrast, responses from the scientific community were more supportive. Similar to the subject matter of the book, Sokal is best known for his eponymous 1996 hoaxing affair, whereby he was able to get published a deliberately absurd article that he submitted to Social Text, a critical theory journal.
Read more or edit on Wikipedia