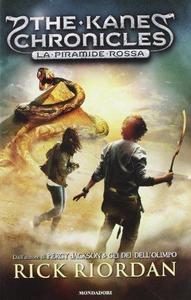 The Red Pyramid is a 2010 fantasy-adventure novel based on Egyptian mythology written by Rick Riordan. It is the first novel in The Kane Chronicles series. The novel was first published in the United States on May 4, 2010, by Hyperion Books for Children, an imprint of Disney Publishing Worldwide. It has been published in hardcover, audiobook, ebook, and large-print editions, and has been translated into 19 languages from its original English.The book follows the Kane siblings, Carter and Sadie, as they discover they are descended from both the pharaohs and magicians of ancient Egypt. As a result, they are able to both host gods and wield magic. The duo unknowingly hosts the Egyptian gods Horus and Isis, while their father is taken as a host by Osiris who is captured by Set. They are thrown into an adventure to rescue their father, while simultaneously trying to save the world from destruction. The novel is written as though it is a transcription of an audio recording by siblings Carter and Sadie Kane, alternately narrated in first-person by the siblings. The Red Pyramid received generally positive reviews with critics praising its pace, action and storyline. The novel was on the Amazon Children's bestseller list. It also won a School Library Journal Best Book Award, and was also shortlisted for the 2011 Red House Children's Book Award. The audiobook of The Red Pyramid, narrated by Katherine Kellgren and Kevin P. Free, was a finalist at the Audiobook of the Year Award.
Read more or edit on Wikipedia