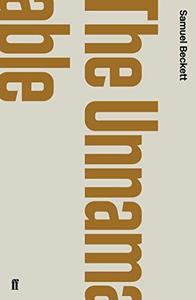 The Unnamable is a 1953 novel by Samuel Beckett. It is the third and final entry in Beckett's "Trilogy" of novels, which begins with Molloy followed by Malone Dies. It was originally published in French as L'Innommable and later adapted by the author into English. Grove Press published the English edition in 1958. The Unnamable consists entirely of a disjointed monologue from the perspective of an unnamed (presumably unnamable) and immobile protagonist. There is no concrete plot or setting – and whether the other characters ("Mahood" [formerly "Basil"] and "Worm") actually exist or whether they are facets of the narrator himself is debatable. The protagonist also claims authorship of the main characters in the two previous novels of the Trilogy and Beckett's earlier novels Murphy, Mercier and Camier, and Watt. The novel is a mix of recollections and existential musings on the part of its narrator, many of which pertain specifically to the possibility that the narrator is constructed by the language he speaks.
Read more or edit on Wikipedia