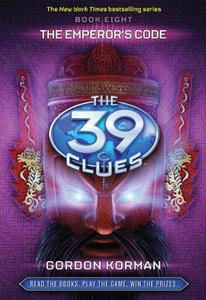 The Emperor's Code is the eighth book in The 39 Clues series written by Gordon Korman. The book's cover, revealed on March 2, 2010, shows a red mask with codes imprinted in specific areas against a purple background. After the release, readers were asked to find three of the four codes printed on the mask. If successful, 39 Clues fans could read an excerpt from The Emperor's Code.
Read more or edit on Wikipedia