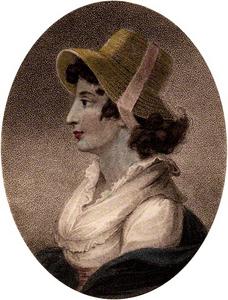 Anna Laetitia Barbauld (, by herself possibly , as in French, née Aikin; 20 June 1743 – 9 March 1825) was a prominent English poet, essayist, literary critic, editor, and author of children's literature. A "woman of letters" who published in multiple genres, Barbauld had a successful writing career that spanned more than half a century. She was a noted teacher at the Palgrave Academy and an innovative writer of works for children. Her primers provided a model for more than a century. Her essays showed it was possible for a woman to be engaged in the public sphere; other women authors such as Elizabeth Benger emulated her. Barbauld's literary career spanned numerous periods in British literary history: her work promoted the values of the enlightenment and of sensibility, while her poetry made a founding contribution to the development of British Romanticism. Barbauld was also a literary critic. Her anthology of 18th-century novels helped to establish the canon as it is known today. The publication of Eighteen Hundred and Eleven in 1812, which criticised Britain's participation in the Napoleonic Wars received negative reviews after which she continued to write poetry but not publish in the public sphere. Barbauld's reputation was further damaged when many of the Romantic poets she had inspired in the heyday of the French Revolution turned against her in their later, more conservative years. Barbauld was remembered only as a pedantic children's writer in the 19th century, and largely forgotten in the 20th, until the rise of feminist literary criticism in the 1980s renewed interest in her works and restored her place in literary history.
Read more or edit on Wikipedia