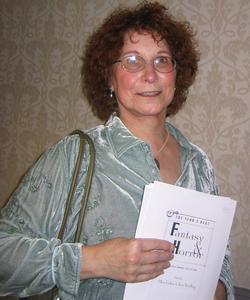 Joan D. Vinge ( (listen); born April 2, 1948 as Joan Carol Dennison) is an American science fiction author. She is known for such works as her Hugo Award–winning novel The Snow Queen and its sequels, her series about the telepath named Cat, and her Heaven's Chronicles books. She also is the author of The Random House Book of Greek Myths (1999).
Read more or edit on Wikipedia