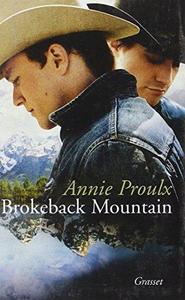 "Brokeback Mountain" is a short story by American author Annie Proulx. It was originally published in The New Yorker on October 13, 1997, for which it won the National Magazine Award for Fiction in 1998. Proulx won a third place O. Henry Award for the story in 1998. A slightly expanded version of the story was published in Proulx's 1999 collection of short stories, Close Range: Wyoming Stories. The collection was a finalist for the 2000 Pulitzer Prize for Fiction. Screenwriters Larry McMurtry and Diana Ossana adapted the story for the 2005 film. At that time, the short story and the screenplay were published together, along with essays by Proulx and the screenwriters, as Brokeback Mountain: Story to Screenplay. The story was also published separately in book form.This story has also been adapted as an opera by the same name, composed by Charles Wuorinen with a libretto in English by Proulx. It premiered at the Teatro Real in Madrid on January 28, 2014.
Read more or edit on Wikipedia