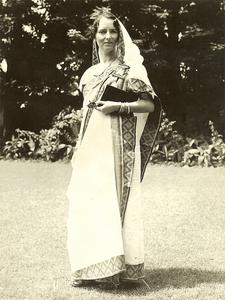 Savitri Devi Mukherji (born Maximiani Julia Portas, French: [mak.si.mja.ni pɔʁ.tɑ]; 30 September 1905 – 22 October 1982) was a French-born Greek fascist, Nazi sympathizer, and spy who served the Axis powers by committing acts of espionage against the Allied forces in India. She was later a leading member of the Neo-Nazi underground during the 1960s.Savitri was a proponent of a synthesis of Hinduism and Nazism, proclaiming Adolf Hitler to have been an avatar of the Hindu god Vishnu. She depicted Hitler as a sacrifice for humanity that would lead to the end of the worst World Age, the Kali Yuga, which she believed was induced by the Jews, whom she saw as the powers of evil.Her writings have influenced neo-Nazism and Nazi occultism. Rejecting Judaism and Christianity, she believed in a form of pantheistic monism; a single cosmos of nature composed of divine energy-matter. Within neo-Nazism, she promoted occultism, ecology, and the New Age movement, and more contemporaneously, she has influenced the alt-right. She also influenced the Chilean diplomat Miguel Serrano. In 1982, Franco Freda published a German translation of her work Gold in the Furnace, and the fourth volume of his annual review, Risguardo (1980–), was devoted to Savitri Devi as the "missionary of Aryan Paganism".Savitri was an associate in the post-war years of Françoise Dior, Otto Skorzeny, Johann von Leers, and Hans-Ulrich Rudel. She was also one of the founding members of the World Union of National Socialists.
Read more or edit on Wikipedia