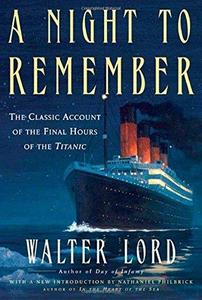 A Night to Remember

A Night to Remember is a 1955 non-fiction book by Walter Lord that depicts the sinking of the RMS Titanic on 15 April 1912. The book was hugely successful, and is still considered a definitive resource about the Titanic. Lord interviewed 63 survivors of the disaster as well as drawing on books, memoirs, and articles that they had written. In 1986, Lord authored his follow-up book, The Night Lives On, following renewed interest in the story after the wreck of the Titanic was discovered by Robert Ballard. The film based on the book and with advice from Lord, was released in 1958. Lord also served as a consultant to Canadian film director James Cameron while he was making his film Titanic in 1997.
Read more or edit on Wikipedia