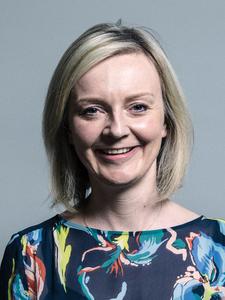 Elizabeth Mary Truss (born 26 July 1975) is a British politician who has been the Member of Parliament (MP) for South West Norfolk since 2010. She has served as Foreign Secretary since 2021 and Minister for Women and Equalities since 2019. A member of the Conservative Party, she has served in various cabinet positions under Prime Ministers David Cameron, Theresa May, and Boris Johnson. Truss attended Merton College, Oxford, where she was President of Oxford University Liberal Democrats. She graduated from the University of Oxford in 1996, and subsequently joined the Conservative Party. She worked in sales and as an economist, and was deputy director at the think-tank Reform, before becoming a member of parliament at the 2010 general election. As a backbencher, Truss called for reform in a number of policy areas including childcare, maths education, and the economy. She founded the Free Enterprise Group of Conservative MPs, and authored or co-authored a number of papers and books, including After the Coalition (2011) and Britannia Unchained (2012). Truss served as Parliamentary Under-Secretary of State for Childcare and Education from 2012 to 2014, before being appointed to the Cabinet by Prime Minister David Cameron as Secretary of State for the Environment, Food and Rural Affairs in the 2014 cabinet reshuffle. Though she was a prominent supporter of the unsuccessful Britain Stronger in Europe campaign for the UK to remain in the European Union in the 2016 referendum, she came to support Brexit after the result.After Cameron resigned in July 2016, she was appointed Secretary of State for Justice and Lord Chancellor by Theresa May, becoming the second female Lord Chancellor in the thousand-year history of the office (after Eleanor of Provence in 1253). Following the 2017 general election, Truss was appointed Chief Secretary to the Treasury. After May resigned in 2019, Truss supported Boris Johnson's successful bid to become Conservative leader. After Johnson was appointed Prime Minister, he appointed Truss as Secretary of State for International Trade and President of the Board of Trade, before appointing her as Foreign Secretary in 2021, replacing Dominic Raab. She is the first female Conservative Foreign Secretary and the second female Foreign Secretary, after Margaret Beckett. Truss was appointed as the UK government's chief negotiator with the European Union and as the UK chair of the EU–UK Partnership Council on 19 December 2021, succeeding Lord Frost.
Read more or edit on Wikipedia